A Social Networking Game For Ipod Touch And Iphone

The publisher and leading developer in mobile games, PressOK Entertainment launched the mobile phone version of the popular PC game Bumper Stars. The game has been specially designed for Apple’s iPod touch and iPhone. The mobile version too promises the same level of fun and excitement as its earlier version.

The game as described by its manufacturers is a mixture of pool, shuffleboard and pinball. This launch of the mobile version of Bumper Stars helps users enjoy the games on their iPhone and iPod touch. The game can be played in both multi player and single player mode.

The Vice President of the Business Development Center of PressOK Entertainment quoted that the company always looks forward to launch more and more interactive games that allows the user to stay connected with his handset and enjoy the benefits of playing an adventurous and interactive game.

The company along with the games provides Facebook Connect, a tool that helps users to challenge their friends on Facebook directly from their phones. They can instantly play against them and beat them.  You can also update and break highest scores and then update them on to your profiles. 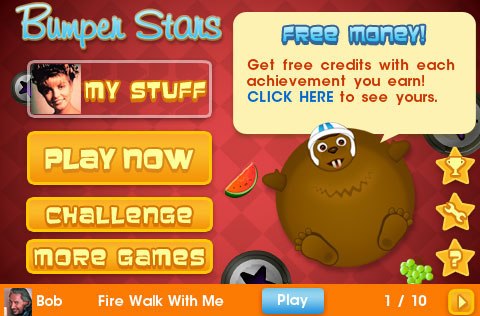 Wade Tiney, Large Animal Game’s founding member and CEO quoted that Bumper Stars has got the best support in the iPod Touch and iPhone. This mobile version enables users to challenge and play with their friends from wherever they are. It also gives an opportunity to those who haven’t played the game on the computer before.

The mobile version of Bumper Stars can be downloaded from iTunes Application Store for a price of $2.99. The company plans to launch the version for Android, Blackberry, BREW and J2ME platforms. Currently iPod touch and iPhone users can have a full feel of this game and have an exciting gaming time.