Malware may steal extremely sensitive data of your computer like you’re bank details, and passwords, financial information, without you even knowing that your security has been compromised.

It doesn’t really matter much if you are using the best updated antivirus, as reports says that 35% of the total infected people are using updated antivirus as per reports last year. A survey was carried out last year by Panda Antivirus and it was found that the malware which are fraud are growing day by day and the growth rate is about 1600% every year. 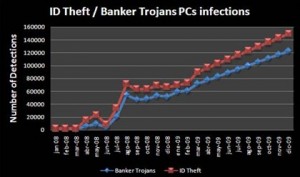 PandaLabs analyzed on about 67 million computers in the last year and according to them 35% of those systems were infected. Those systems were having the latest updated antivirus installed. There is always some user who is actively exposed into these malware identities as well as data thefts. They amount up to 1% percent of the total internet users.

Hackers code different types of Trojan and malware every time. Some Trojans are there to steal your information related to bank login information which is known as the name of Banker Trojans. This is really going to pose a major problem to every internet user. To protect the system from the malware the users may use Shield Deluxe which could help them a lot.