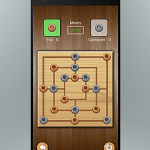 Nine Men's Morris App for Android Nine Men's Morris is a strategy board game for two players dating at least to the Roman Empire. The game is also known as Nine Man Morris, Mill, Mills, The Mill Game, Merels, Merrills, Merelles, Marelles, Morelles and Ninepenny Marl in English. The game has also been called Cowboy Checkers and is sometimes printed on the back of … END_OF_DOCUMENT_TOKEN_TO_BE_REPLACED