Many people are familiar with the command (commonly abbreviated cmd) prompt that is on their Microsoft Windows OS. From here you can run a variety of commands that will display various tidbits of information. One of the most commonly used command prompts is the ‘ipconfig‘ prompt.
Now, once you are on your cmd screen simply type in “ipconfig” and you should get something similar to this below: 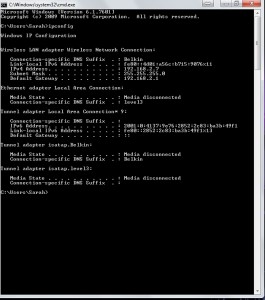 You can also use the ipconfig commands (specifically ones pertaining to the DNS) to resolve some common errors that you may encounter. If your DNS cache is outdated or corrupted in any way while browsing the internet you can have difficulty accessing the sites that became corrupted in your cache.

One such scenario would be you trying to access a site that was down, but then it came back up later. If your DNS cache got corrupted it will save the information on the site being down even though the site is now updated and back online. Due to that corruption you will still see the site as ‘down’. A way to fix this is by flushing your DNS and retrying the site.

As soon as you experience internet connection troubles with your computer you should first check to see if your router is online, WiFi is on, then you go to your cmd prompt. These are common issues that many people face and it is a quick fix for internet problems that often lead to hours of frustration.