Create A Shortcut For Aero Flip 3D And Add On Desktop

Microsoft Corp. has integrated Windows Vista and Windows 7 with Windows Aero support and especially a Flip 3D feature in an aero support. Flip 3D is generally a window switcher which switches in between the running windows in appearance of live streaming 3D. There is a shortcut in the Quick Launch Bar with which you can activate Flip3D. You can also activate this feature by just pressing Win + Tab keys.

Most of the Windows 7 users don’t want to add shortcut again to Quick Launch bar and would like to add Flip 3D icon to Taskbar. To do so, you can sue the following trick to create a shortcut to activate Flip 3D.

You may be uncomfortable with the default icon for the created shortcut which looks pretty awkward. If you want to change the default icon, just right click on that icon and then go to its Properties. Find out the button named as “Change Icon” in Shortcut tab. Click on this button. Hit the “Browse” tab. After that copy and paste the following line into the text box of File name:

One of the available icons will be selected from the windows switching icon list. After the selection, highlight that icon and click on OK button to modify the icon. 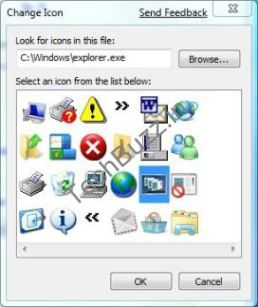 As an alternate way to pin the short of Flip 3D shortcut to the Windows 7 Taskbar, just right click on shortcut file and then select Pin to Taskbar option from context menu.