Late last month the United States authorities decided to take a bit stab at online piracy and counterfeit. This initiative that they are taking up, termed Operation In Our Sites, has been the undoing of more than 100 different websites that were involved in the distribution of copyrighted materials. These copyrighted materials ranged from fake designer purses, illegal copies of movies, games, software, and even jerseys.

Operation In Our Sites has the support from both the Department of Justice and the Immigration and Customs Enforcement, as well as the entertainment industry. With these powerful groups backing this movement up, it leaves very little for website owners to do to protest this move.

One big hit to online piracy and counterfeit materials was the day after Thanksgiving. It was termed “Cyber Monday Crackdown” because it resulted in the complete takedown and seizure of eighty-two domains. The total of seized sites is now over a hundred and thirty and unfortunately they can’t protest it at all.

On top of seizing these sites, the officials wanted to ‘scare’ visitors and other website owners by putting up an official looking warning that states that the domain was seized and that penalties for those breaking copyright regulations were $250,000 fine and up to five years in prison. 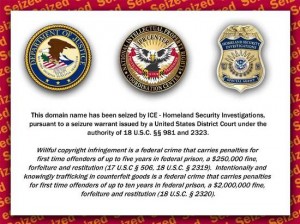 It is certain that the seizures will continue and more and more counterfeit sites will be removed however will it make a difference? Isn’t the underlying problem the fact that most of the products that are counterfeited are so expensive that people wouldn’t/couldn’t pay normal price for them?