Reports suggest that Samsung Galaxy Tab, being a single-core tablet would not meet the basic requirements to run Honeycomb, tablet-optimized OS version by Google. Apparently the Galaxy Tab owners would only be expecting that they get an update with Honeycomb.

Managing Director of Enspert, Bobby Cha while talking to PCMag said that Honeycomb requires a Cortex A9 dual-core processor for proper functionality. Until now, Nvidia’s Tegra 2 is the only chipset that has incorporated this processor and will be appearing in a number of Android tablets at Consumer Electronics Show that is to be held in the second week of January.

Cha also said that 1280 X 720 is the minimum screen resolution prerequisite, and therefore the Honeycomb-based tabs will have 7-inch screens or larger.

It is quite obvious that Samsung Galaxy Tab is well below the required specifications as it incorporates a 1GHz Hummingbird single-core processor, and comes with a resolution display of 1024 X 600. Also, as suggested by Samsung, Galaxy Tab would only be updated to “Gingerbread” i.e. Android 2.3. 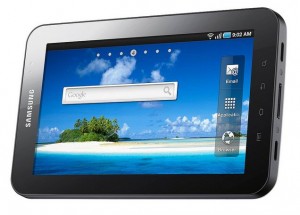 Meanwhile, Google chose to remain silent about the requirements of Honeycomb, and did not even clarify if version number that is being talked about is 3.0 or 2.4. However, this would not be good news for the owners of Samsung Galaxy Tab, especially for the ones who have picked a set just recently expecting to enjoy Honeycomb capabilities on it.

Last December, Google’s VP of engineering division, Andy Rubin demonstrated Motorola’s Honeycomb tablet, but he did not reveal any clear details. It is only known that the Android version will support large-screen apps as well as software-based back and home buttons. Additional details are expected to trickle out as soon, as gadgets manufacturing companies start unveiling their forthcoming tablets.

The Buzz is that Motorola’s new tablet “Droid Xoom” and LG’s “Optimus Pad” are likely to be announced at Consumer Electronics Show, 2011. Both have been incorporated with dual-core processors and they would of course have Android Honeycomb. Many believe that other tablet manufacturers might not make it due to Honeycomb resource requisite issues.

Last year, with Android 2.2, the then latest version of Google’s Android OS, Google had indicated that it would not suit Android tablets. However, the same is been used so far in Samsung Galaxy Tab which is considered as one of the top Android tablets in the market.

We can expect Android hacking community which is a decent-sized community to get involved and attempt to bring Honeycomb to Galaxy Tab. However, even if they are successful in doing so, it will possibly be loaded with issues. This is because, if the 1280 X 720 screen resolution speculations are true, and the user interface of Google’s latest Android OS will not support 1024×600 screen. Galaxy Tab will need to crop or downscale the interface so that it works well on the 7-inch display of the tablet.

Honeycomb is expected to be out in the market by the end of January. Let’s wait and see whether these minimum specifications of Honeycomb are just speculations or if the Galaxy Tab will really be left out.