The feature Aero Glass Transparency effect has been introduced in Windows 7 which gives a blur outlay to all the maximized and normal windows. This feature displays slightly translucent and milky or frosted glass blur effect to surrounding frame of window. You could see the desktop background having wallpapers and icons with partial unclear visibility.

First of all, you have to open the Registry Editor (type “regedit” in run box). Navigate to the following registry key:

(Navigate to the first registry key, if you are currently logged in and the second one could be used by all the users)

Now, create the new registry value called DWORD (32-bit) Value. Rename it as HideBlur and set its value to 1.

When you apply the setting to registry at HKEY_CURRENT_USER, then system will give this a first priority. If there is any difference in the above two registry settings, then the settings at HKEY_LOCAL_MACHINE will be overwritten. To get the effective settings, you have to restart your computer. You’ll get the transparent window frame right away. The extract given below helps you to identify the difference in the transparency effects before and after applying the registry hack.

Note: – The registry hack tends to work only with some of the interim builds of Windows 7, which are leaked by the testers. These builds are 7048, 6956, 7127 and 7106. Other builds like Windows 7 RC (build 7100), Windows 7 Beta (build 7000) and build 7077 are not at all supported by this registry hack. As well, only border frame of window could be made transparent not including the Taskbar. 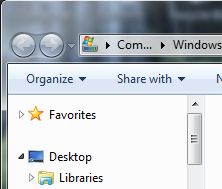 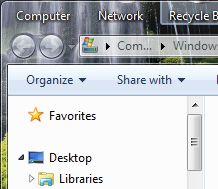 If you don’t want to manually modify your registry, you could download and apply the following registration entry file named as HideBlur.reg. Use the following link Here to download it.

You could also use the following code pasting in the text file and saving as any name with .reg file extension.

If you are using the build version, which is not supported by Windows 7, then you could easily enable the full transparency effect by replacing two files namely “dwm.exe” and “uDWM.dll”. You could get these files in %systemdrive%\Windows\System32\ folder with the versions from Windows 7 Build 7127. The value of HideBlur registry key is calculated by “dwm.exe”. If it has the value as 1, then uDWM.dll will perform the transparency effect on the border of the on window.

Moreover, the users without Windows 7 Build 7127 system on-hard have to download uDWM.dll and DWM.exe files.

If you want to overwrite or replace the uDWM.dll and dwm.exe files in Windows 7 OS, then you should take the rights and acquire the permissions to completely access all the files. After that, just disable the service namely Desktop Windows Manager Session Manager. To do so, go to Control Panel, System and Security, and then Administrative Tools, next to the Services module. Now, simply copy the uDWM.dll and dwm.exe to the %systemdrive%\Windows\System32 folder and your work is done.