Microsoft has completely modified and reformed the Taskbar in Windows 7 wherein the window buttons of running applications which are displayed on the taskbar have been changed to icons.

You can directly pin programs or shortcuts to the Taskbar which eliminates the need to use Quick Launch bar.

Windows 7 Taskbar also features Jump Lists and Aero Peek which offers a superior thumbnail preview. However, there are a few users who prefer labeled buttons on the Taskbar rather then just icons. If you are one of them, here’s the way you can get back your button style Taskbar.

Microsoft has an option that allows you to revert back to the Windows XP/ Vista Taskbar Style which displays labeled button bars of running applications and not just the program icons. Follow the below mentioned steps. 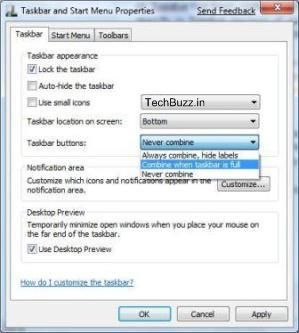 Once you have done this setting, Windows 7 Taskbar will be changed to the button style Taskbar which will show labeled button bars of running applications.

The pinned programs or shortcuts which are not running will be still displayed as icons. This feature in windows 7 Taskbar is quite handy as it helps you differentiate between non-running pinned programs and running applications.

If you wish to make your Windows 7 Taskbar exactly identical to that of Windows XP/ Vista, you may simply unpin the programs or shortcuts from the Taskbar and add them to Quick Launch bar.