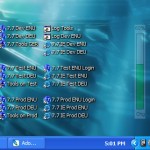 Creativity is in the air and it is not restricted to 3D only! Toshiba recently released the supposed to be Power TV Series [PC1] containing 2 devices. It is unique as it is the world’s first [says Toshiba] Power TV to feature a consolidated battery. It goes without saying that the LCDs are so created that it can come I handy even under tough infrastructure conditions. After … END_OF_DOCUMENT_TOKEN_TO_BE_REPLACED

Power-up Your Batteries with Urine This is the latest in battery technology, a group in Singapore came out with a battery that was powered by (among other fluids) urine – and later, a Japanese company marketed this technology with the already popular Non-Pollution Power (NoPoPo) Aqua Batteries. The batteries contain a mix of carbon and magnesium in them. The added fluid then … END_OF_DOCUMENT_TOKEN_TO_BE_REPLACED