Numerical computations are done with Octave which works on an interactive basis with the users. While the application is written in a language specifically used for mathematical computations, the functions which are user defined are written in more common languages such as C, C++ and FORTRAN or in Octave’s language. Octave is freely licensed software,and the usage of Octave … END_OF_DOCUMENT_TOKEN_TO_BE_REPLACED 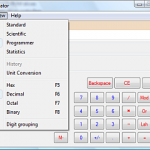 Check Out The All New Windows 7 Calculator- Powertoy calculator for Windows 7! Looks like Microsoft has tried to build one of finest OS ever released in the form of Windows 7. With Windows Vista having such a beautified graphical user interface, nothing much could have been upgraded in that area. So now, Microsoft has started updating and upgrading long pending … END_OF_DOCUMENT_TOKEN_TO_BE_REPLACED