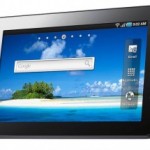 Reports suggest that Samsung Galaxy Tab, being a single-core tablet would not meet the basic requirements to run Honeycomb, tablet-optimized OS version by Google. Apparently the Galaxy Tab owners would only be expecting that they get an update with Honeycomb. Managing Director of Enspert, Bobby Cha while talking to PCMag said that Honeycomb requires a Cortex A9 dual-core … END_OF_DOCUMENT_TOKEN_TO_BE_REPLACED