The Xbox Kinect is one of the hottest selling electronic devices on the market. It’s completely hands free technology makes the user the remote and allows them complete control with body movements and voice commands. On June 16th Microsoft, teamed with Xbox, released the Kinect Software Development Kit to the general public. It is still in the beta stages, but the possibilities … END_OF_DOCUMENT_TOKEN_TO_BE_REPLACED

When it comes to innovative technology, Microsoft and Xbox hit the ball way out of the park when they launched their newest product; the Xbox Kinect. Their catchy slogan “You are the controller” speaks the truth and defines their product very well. With the Kinect, you literally are the controller and there are numerous options, combined with the amazing hands free technology, … END_OF_DOCUMENT_TOKEN_TO_BE_REPLACED 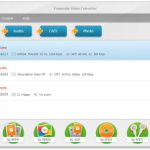 Resolving Problems Related To Watching Movies On Media Player Are you having difficulty in watching some digital movies on media player? Just read this article which will help you. When surfing on internet, sometimes we get some very interesting digital videos which we like to watch again and again in our leisure time but sometime our browser does not support with that version … END_OF_DOCUMENT_TOKEN_TO_BE_REPLACED

Well I was really wondering, when I got the list of Top 10 games for the month of Oct, why Call of Duty was not in the list. Well may be, there are other reasons than it being popular ! Call of Duty, has managed to create a ‘record of sorts’ because it has surpassed all earlier records in game sales to touch a figure of over $650 million with 5 days of its launch only. It … END_OF_DOCUMENT_TOKEN_TO_BE_REPLACED

I wrote how Xbox has more sales, when compared to Sony PS3 or Wii in one of the previous post. I was curious to see what games folks are playing. Though this data is subjected to change, a compilation will not hurt. Given below are the top ten games for October: 1]NBA 2k11 – Xbox, Wii, PS2, PSP,PC. 2] Fallout: New Vegas – Xbox, PS3, PC. 3] Medal of Honour –Xbox, PS3, … END_OF_DOCUMENT_TOKEN_TO_BE_REPLACED