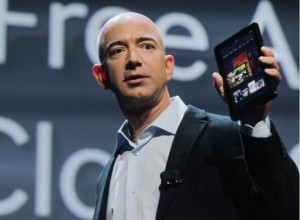 The competition for tablets has been fairly one sided so far, with Apple dominating the competition with its famous (yet expensive) iPad devices. Their cheapest iPads cost around $300-400 and from there the prices skyrocket. Thankfully the monopoly has been broken and Apple has some real competition in the tablet world now.

In a stunning move, Amazon announced that the new Kindle, named the Kindle Fire, will be out on the market on November 15 (you’ll find the specs of Kindle Fire)and has a staggeringly low price tag of only $199.

The new Kindle Fire isn’t just heating up the competition with Apple, but it has also crushed the competition between the Kindle e-readers and the Barnes & Noble’s version of the e-reader known as the Nook.

Right after the press release of the Kindle Fire, Barnes & Noble stock dropped 9% in just one day! This is a true testimate of the effects of this brand new e-reader, and unfortunately for Barnes & Noble the new Kindle hasn’t even hit the shelves yet so it can expect its stocks to continue dropping.

So lets look at some of the sleek new features of this new Kindle. We know that the price tag is incredibly amazing, but will its other features live up to expectations?

It still is capable of installing all of your favorite apps, while maintaining that e-reading function that most people love. Unfortunately the iPad’s have cameras with FaceTime (You can see and talk to friends and family on Ipad, very similar to video conferencing / web chat), but is a camera function really worth several hundred dollars?

With the Kindle Fire hitting the market in a little over a month, it will be interesting to see how its competition will respond to this bold move.