Believe it or not, but Internet Security 2010 is a complete fake anti-virus which falls under the Antivirus Live and Antivirus 2009 family. You would be surprised to know that Internet Security 2010 is a virus itself, which make believe to be an antivirus suite. You know how it makes fool to users, it generates fake viruses by infecting your system and then convince you that your system is being infected.

Once you installed this program on your computer, it starts scanning your computer automatically. After then it will show you several threats and prompts you to buy internet security 2010 suite in order to remove that threats. Moreover, it scans your system routinely and set itself as the startup program so whenever your system restarts, it will be popped up on the screen. Usually it shows “Worm.Win32.NetSky” warning on the screen after completing the fake scans.

It literally convinces users that their system is infected and need to be scanned properly with full version. You cannot delete the threats until you buy it. If you have installed it on your system and encountering that kind of problems then you need to remove Internet Security 2010 from your computer instantly.

There is not only problem of fake alerts, but it also blocks some applications and programs so you cannot find out the way to uninstall this rogue anti virus. Whenever you click on the programs, it shows “File is Infected” message on the screen. Another message will be displayed on the screen mentioning “Buy VSCoded Pro”.

Most of the newbie or non-tech users purchase this product without researching about it. Once they buy it, all fake threats and alerts will be removed and declares your system completely clean free from threats. Now question take place, what are the problems to buy this product?

There are numerous confidential details that can be stored in its database while you enter your credit card information in order to purchase it online. In a nut shell, it is a complete rogue and useless anti-spyware which only pretends to be an antivirus suite. If you want to get rid of this problem, you need to remove it from your computer instantly. 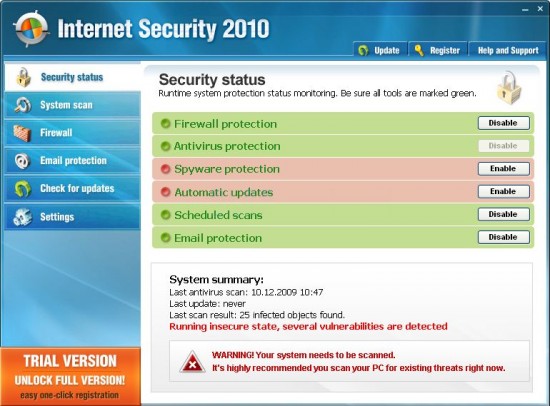