When you run lots of programs on your computer, the computer might cease to completely respond. All it occurs because all the running programs tend to occupy the entire available space in CPU cycle.

In all such conditions, user press CTRL+ALT+DEL keys to open up Task Manager and terminate the program which is sucking too much CPU usage. However, most of the times even the Task Manager also cannot open due to lots of running programs on your computer.

Now, you have one and only one choice and that is to restart your whole system. Right now, you may find the usefulness of software utility named as “AntiFreeze”. AntiFreeze helps you to suspend all running programs for a short time.

It provides a space for the programs so that you can identify exactly which one is grasping too much CPU cycles. You can then terminate the programs running with high CPU cycle, by means with just few simple clicks. 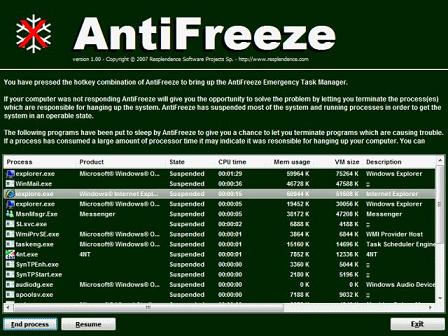 The Antifreeze software application is very easy to use. All you have to do is just install and run the software once. A small, stand by icon will be then located in system tray. In emergency conditions you have to just press the hotkeys CTRL+ALT+HOME+WIN to activate the application.

It is somewhat similar to the conventional task manager,  but in AntiFreeze, you can suspend all running programs temporarily just before terminating them. This software utility will absolutely help you to from frustrations, when such unfortunate situation occurs and you are trying to recover all unsaved works.

However, when your system hangs up due to some errors in hardware device, the software utility may not be usable. Except this disadvantage, this application utilizes very little amount of RAM. AntiFreeze software easily runs best in Windows OS for example Server 2003, XP and even Vista, and you can download it for free of cost.