Most of the times, you might face problems while sharing violation. In such situations, you could not delete particular files or folders because the files are being used by particular running program. That file cannot be deleted while the folder or the file is being accessed by other programs or users.

Such situations are quite frustrating, especially when you have to delete the file or folder immediately. The massages would pop up saying “Cannot delete this file because it is being used by another person or program“.

“Close the programs that uses the file and try again” or “This process can’t be done since the file or folder is open in other program. Close that program and try again.”, “Make sure the disk is not full or write-protected and that the file is currently in use”, “Cannot delete file: Access is denied” and many others”. 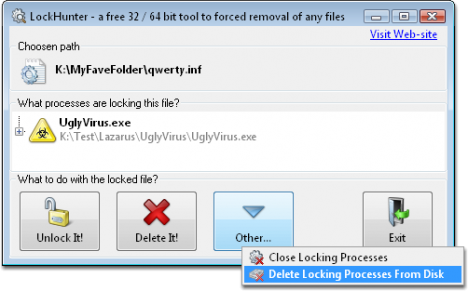 You may get lots of utility tools with which you could forcefully unlock or delete these files from being used or locked by some of the other applications. For example, to do so, you could try out FileASSASSIN, Unlocker or File and Folder Unlocker. In addition to these applications, you could try same but easier tool named as LockHunter. By using this freeware you could easily delete the files that are blocked via other users or unknown programs.

As a special feature, this tool actually shows the programs in which the file is opened or locked. This is important information with which you could select to unlock the file by closing the program, force to unlock the file being used by another program or you may forcefully delete the file along with the program. LockHunter does not remove the file permanently, which prevents you from accidental deletion of some useful files. It moves the files to recycle bin so that you could later recover your important files, which are unintentionally deleted. Use the following link to download LockHunter 1.0.