While trying to execute a Hive query you can end up with the following error: return code 1 from org.apache.hadoop.hive.ql.exec.DDLTask Try re-running the same query, and if that doesn't work, then Start Hadoop if it's not running or restart Hadoop if it's already up and if Hadoop's running in cluster mode, check if DataNode is running. This should solve the problem. … END_OF_DOCUMENT_TOKEN_TO_BE_REPLACED

Website of all kind use reCaptchas due to the increase of spam, bots, and other automated processes that come their way. Sites such as forums, blogs, online games, and even regular websites are often target for spammers who try to utilize automated programs for some advantage or gain. This is why reCaptchas and verification images have become increasingly popular because they … END_OF_DOCUMENT_TOKEN_TO_BE_REPLACED 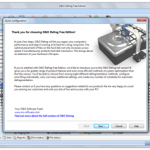 If you are a daily user of computers then a slow running computer is the last thing you want during your day to day activity. There could be many reasons for your PC slowing down. One of them can be fragmentation of disks. Fragmentation occurs when your files are scattered all over your disk in no particular format. What exactly is Fragmentation? To keep it simple, your … END_OF_DOCUMENT_TOKEN_TO_BE_REPLACED

It often gets annoying when you are working on something important and your PC slows down. There could be many factors behind this. One of the reasons for your PC slowing down could be installation of extra software. Software requires some amount of memory to get started. Thus, the more number of software you install on your PC the more memory they need. For an individual … END_OF_DOCUMENT_TOKEN_TO_BE_REPLACED

As the United States flails about with their banhammer trying desperately to eradicate the net of all traces of piracy, another casualty has been added to the list and this time it is a major blow to pirateers. Megaupload, one of the world’s largest file sharing sites, has been taken down by the Department of Justice on Thursday January 19, 2012 thanks to an indictment by the … END_OF_DOCUMENT_TOKEN_TO_BE_REPLACED