Nagraj is a comic character created by the Sanjay Gupta in late 1980s. Nagraj, the king of snakes, has total control over these serpentes. The story about Nagraj is completely based on fantasies and science fiction. Nagraj was created by an evil scientist Nagmani, as a terror weapon against humanity. However, while performing his first task, he realized that Nagmani is a bad person and means harm to the innocent people. Nagaraj then opposed Nagmani and refused to work for him.

Since then, these two have been the biggest enemies of each other, one fighting for the bad people and the other fighting against them. Later, Nagraj moves to a metropolitan city called Mahanagar, and earns a living as Raj at a reputed TV channel. 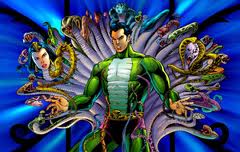 Shaktiman is an imaginary character, played by the Mukesh Khanna in the show. This superhero is person who possesses unlimited superpowers. However, he leads a normal life in the society as Pandit Gangadhar Vidyadhar Mayadhar Omnkarnath shastri. He is the chosen man by a Saint from Catapult, named Suryavanshi, to fight against evil. They taught him tricks and blessed him with multiple “Yogic Powers”. Initially, he was trained to perform only Kundalini Yoga to fire up the 7 chakras of the body that gives super natural powers. Later, he struggled a lot to gain other powers, as he had to first died, burn his body to ashes, and then evolve all over again. Ultimately, he emerged as Shaktiman with magnificent supernatural powers to fight against evil.

Shaktiman’s biggest enemy was Kilvish, the king of evil. Shaktiman fights against the vicious people and pursues the path of justice to bring harmony in the society.

The Indian Hindi film, Krrish, is all about science fiction. This film was directed, written and produced by the Rakesh Roshan and Krrish’s role was played by the Hrithik Roshan. This superhuman has inherited the supernatural powers from his fathers. His origin goes back to the point when his father, Rohit, accidently gets acquainted with alien named Jaadu, who gave supernatural powers and thus, Krrish finally ends up inheriting his father’s powers. Krrish belongs to middle class family where he is treated and bought up as normal and innocent boy. 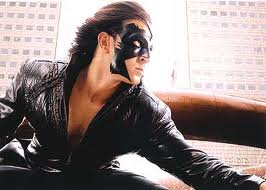 However, most of his friends considered him unearthly due to his supernatural powers. Thus, his grandmother, a role played by Rekha, restricts him from going anywhere near the mountains in the northern part of India, where they resided. It is this place where Krishna, the superhero, polishes and improves his abilities with no friends around him. Below are some of the magical abilities he possessed:

On the whole, Krrish was equipped with unbelievable supernatural powers that made him a superhero. He fights against the villains and rescues his father, who was wrongly reported dead in a lab accident.

Lord Hanuman is the incarnation of lord Shiva, a Vanara. Lord hanuman is the son of Anjani, the mother and Kehsari, the father. He was a great devotee of Lord Rama, who truly believed that Hanuman was the real incarnation of Lord Vishnu. Hanuman supported Lord Ram to fight against his enemy, Ravana. Hanuman was and is the most powerful mythological superhero, as he possesses unlimited supernatural power. His entire life journey revolves around the Lord Rama, as Hanuman believed to have born to serve Lord Rama.

He has enormous powers that made him the biggest and mightiest Vanara. He is renowned for his courage, power, devotions, and selfless services.

With these unbelievable powers, hanuman supported Lord Rama to fight against Ravana. The entire Ramayana, a Hindu epic, has complete and detailed information about Hanuman’s life. He discovered the place where Lord Sita, wife of Lord Rama, was imprisoned. He brought Sanjivani Booti from far away mountains, when Lord Lakshman (Rama’s Brother) was unconscious during the war against their enemy. There are several Television serials and Movies that have already been developed and some are still in the process, featuring the life of Lord Hanuman. It is believed that Lord Hanuman is still on the earth.

Karma is the story of a person who was born with supernatural powers. This is a fantasy based TV serial , wherein Siddharth Choudhary plays the lead role of Karma. This character has supernatural powers to fight against the demonic evil Markesh, who kills Karma’s grandfather.

The entire story of Karma revolves around his life, where he keeps defeating the villains and minions working for Markesh. He only pursues the path of justice and brings serenity in the society. Karma wears a facemask, in order hide or conceals his identity from the public. He discovered at the age of eighteenth that he has got all these super powers to defeat the demon called Markesh. He saves people from the enemies that are against humanity and want to destroy the world. Karma’s actions are based on principles of securing the truth and bringing tranquility in the society. He helps the poor people and fights against the devils to eliminate them all.

Karna is one of the strongest characters of Mahabharata, an Indian Epic. He was son of Kunti and Surya. Since Karna was born before Kunti got married, she had to abandon her first child. He was brought up by the Adiratha and his wife, Radha. Karna was very close to Duryodhna with whom he fought against the Pandavas in Mahabharata. He was blessed with power of Surya and he was renowned for his war tactics and archery. Moreover, people believe that Karna was the greatest generous person and never backed out on his words.

Karna was blessed with armor (Kavach) and earrings (Kundal). He was very brave and courageous person and he was believed to have power to defeat Arjuna, the greatest ever archer.

With these powers and unique role in the great Mahabharata, some of the people believe that he is the real Indian superhero.

The entire story of this series revolves around a child born with wings and some unique superpowers. Garuda is the new forthcoming animated cartoon series developed by Rudra Matsa Entertainment. Garuda comes across many challenging situations in his learning period, during which he also befriends with a tiger. He is a hypothetical Indian hero having several superpowers like flying in the air, unbeatable physical strength and intellectual abilities. His uniqueness makes him an extremely powerful character as a child, who discovers a whole new world in his childhood. However, he only interacts with the other people in the world and uses his power to help them, once he grows up. He also has the ability to communicate with Lord Vishnu. 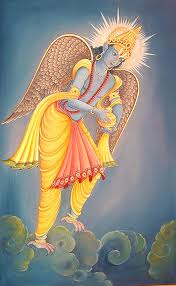 This animated screen play revolves around Garuda’s life, how he discovers his new world in his childhood and his interactions with Lord Vishnu. Garuda is the latest animated cartoon series, which is based on mythology and science fiction. The production team is still working on the whole script and its pictorial representation. However, it is believed that children will love this animated series because it has all, mystery, fantasy and innovative characters, which mostly children love to see.

Ghatothkach is an animated movie, which was released in 2008. It is based on a life of Mahabharata character, Ghatothkach, son of Hidimba and Bhima. Ghatothkach is blessed with unlimited supernatural and magical powers. He can easily out grow his actual size and reduce his height whenever he wants. He has extraordinary physical strength and always carries a Gada, his Weapon. He is Gadadhari paladin and always helped needy people and animals in trouble. 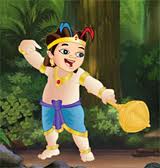 The story of Ghatothkach revolves around his friends and battle against the evils to save the world. During any kind of combat, he was never accompanied by his father, Bhima. This superhero sacrificed his life in the war of Mahabharata, in order to fight for his father’s honor. He performed all his duties righteously till his death, be it being a good friend or a caring son.

Doga is the comic fiction character created by the Tarun Kumar Wahi. Doga was found in a garbage as an orphan by the ruthless dacoit Halkan Singh. Although Halkan Singh brought him up, but he always treated the child like a dog. Eventually, he is abandoned by Halkan Singh, only to get shelter at Adrak chacha’s house, the owner of the Lion gym. There he gets trained and strengthens his physical powers. He witnesses ruthless and brutal murders of his so called family members (Adrak Chaha and his brothers). In order to take revenge, he chooses to become Doga and wears a mask of a dog. He believes in “Uprooting the problems rather then solving it”. 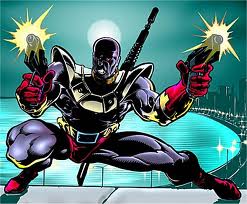 Doga, the superhero, has powers to communicate with dogs and he could also order them to perform any task. Moreover, he has several other strengths and abilities that make him a courageous and a stronger person who can fight against the evil.

In the series, he saves the human race from all the demons in the world.

Lord Ganesha was the son of Lord Parvati and Shiva with a head of an elephant. Lord Ganesha is renowned for wisdom, Power, eliminating obstacles, and peace. It is believed that he was blessed with ultimate supernatural powers by the all deities of Hindu. Ganesha was very agile and naughty child who rode on a rat. 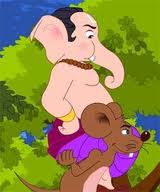 Ganesha was blessed with superpowers to pursue the path of justice and kill the evil spirits.

All these powers made him a perfect warrior who fights against the malicious people and save the saints and gods from the demons. He has its particular food cravings for Ladoos, a sweet dish. He, once demonstrated his powers against his father, Lord Shiva initially and as a result, his father cut his head off. Thereafter, Lord Parvati, Ganesha’s mother, asked him to bring her child back to life and they managed to get an elephant’s head. There are many animated films and serials, which managed to get this character lots of popularity in the Indian television and cinema industry, as a real Indian superhero.

Bhokal is another comic fictional character created by the Sanjay gupta. Bhokal was initially prince, who later was trained and taught by his Guru Maha Bhokal. He acquired a state of Vikasnagar and gave up his entire life to save this place and the human race against the evils. He avenged his parents’ death and death of beloved, Turin. He is portrayed as a fearful and courageous person, who could die for his people. His original name is Rajkumar. 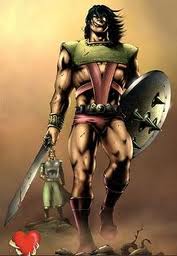 He is still in action and saving the human race from the clutches of evil minions and demons in the series. This character has few close friends named Atikroor, Tilli, Gajo-Bajo and others. The entire story of Bhokal is very dramatic and full of interesting mysteries.

Chhota Bheem is basically an animated series, which is being aired on the Pogo TV channel. The protagonist Chhota Bheem lives in a town named, Dholakpur in India. The character is a nine year old boy, who is blessed with extraordinary and stunning powers. He is very intelligent, brave and strong. He is always ready to help the needy and fight against the bad people. He is the protector of his town and that’s why he is a favorite of the king Indravarman. 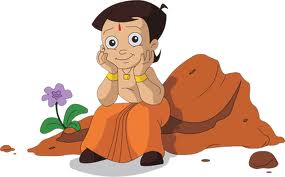 Bheem was never afraid of anything whether be it’s a beast or a criminal. He solves very critical mysteries within no time. He craves for Laddoos, which indeed gives him a surge of power and energy to make him much stronger and powerful. He has several friends such as Chutki, Raju, Jaggu (Talking monkey), and Indumati (Daughter of the King). He makes a few enemies, who wants him dead Daku Mangal Singh. There are some other characters in Bheem’s life that help and support him in fighting against the dacoits, evils, and beasts.

This animated series is very popular among children and its still being broadcasted on Pogo channel at different timings.